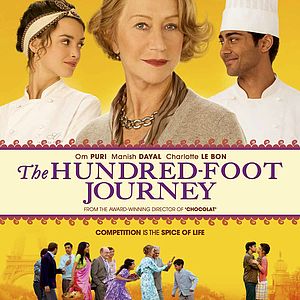 Helen Mirren + Om Puri + France + cooking = a film I’ve been looking forward to seeing. My mom wanted to see it too, so we made a plan to meet up yesterday afternoon. I planned poorly, not thinking about beach traffic, and got there late, so I missed not only the credits, but the first ten minutes of the movie. Anyone who knows me knows that I hate missing any part of a film, including previews and credits. I think I’ve taken one bathroom break in all my years of seeing movies (not counting shows with intermissions, like Gone With the Wind and Hamlet [Kenneth Branagh’s version]). Maybe I’m chilling out a little in my dotage.

I enjoyed the film for what it was, which was a sweet, uplifting story of family, hard work, and self-confidence. Despite the movie poster trying to make me think that Helen Mirren’s character, Madame Mallory, was the protagonist, she was not…and Mirren was not the standout performer. Her French-accented English sounded like very hard work, particularly each time she said “Marguerite”, the name of the ingenue character. However, the interactions between Mme. Mallory and Om Puri’s character, Papa Kadam, were among my favorite moments.

As I entered the theater, Hassan Kadam (played by Manish Dayal) and his family were arriving in a small town in France as their car broke down in the rain.They find a local woman who feeds them and advises them where to find shelter while their car is being repaired. The family subsequently comes across a run-down, abandoned restaurant, which Papa insists on buying in order to start a new restaurant (their former family business in India)…right across the road from a Michelin-starred owned by Mme. Mallory.

With a couple of exceptions, the family is greeted with disdain from almost everyone in the village and open hostility from several people, including Mme. Mallory’s staff. Whether based in racism, xenophobia, or simply the most intense locals-only attitude I’ve seen outside of The League of Gentlemen, the antagonistic behavior was difficult to watch.

The movie could have gone super cloying, especially considering that Steven Spielberg and Oprah Winfrey were involved, and maybe for some viewers, it did. For me, it was sweet, but not saccharine. The acting was very natural, for the most part. The relationship between Hassan and Marguerite (played by Charlotte Le Bon) was not the same old thing, which is not to say that it was revolutionary, but the young characters were portrayed as much more equal than we usually see.

This was a great movie to see with Mom, who fortunately, wasn’t too annoyed at my tardiness. The small container of ice cream I smuggled in for her probably helped.

3 thoughts on “The Hundred-Foot Journey”