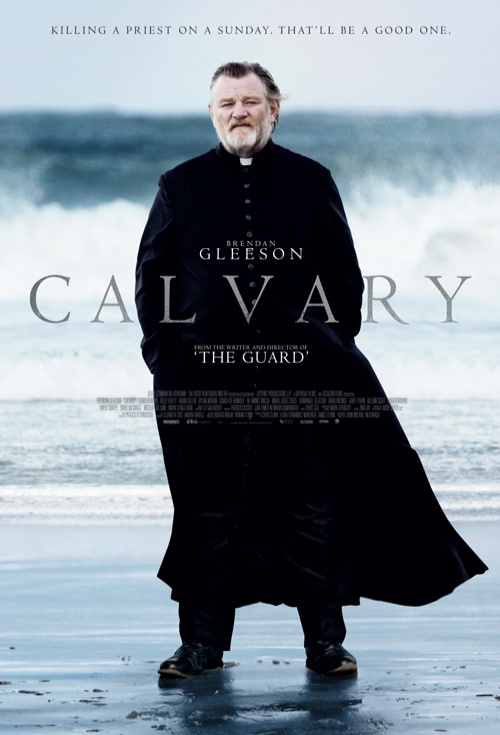 This time of year is not my favorite for movies, so when I hear about something outside of the standard summer menu of car chases and super heroes, I get excited. I saw the preview for Calvary last month, before a matinee showing of Venus in Fur. I hadn’t heard a thing about this new Irish film, but I was immediately drawn to it.

I wouldn’t call Calvary a whodunit, a thriller, or a crime story. It’s not really about religion, nor is it strictly speaking a dark comedy, despite the screenplay’s stinging wit. It’s a character piece, and who better for the role of Father James Lavelle, resigned to his life as a priest in rural Ireland, surrounded by eccentric locals, than Brendan Gleeson?

Gleeson is quietly powerful, often saying much more with his soft, scruffy face, than with words. As we meet him, he’s taking confession from a man who pledges to kill him in a week’s time.

We follow Father James shambling through the week as he tries to figure out how to cope with the eccentric locals, his suicidal daughter, and the possibility that he will be dead by the end of the week.

The dramatic scenery (photographed by Larry Smith) could well be regarded as the second lead in this film, but it wouldn’t be right to leave out the supporting cast, which includes two of my favorite Irish comedy actors, Chris O’Dowd and Dylan Moran, as the town butcher and the local millionaire, respectively. Gleeson’s gentle moments with M. Emmett Walsh as an author who is also not long for this world, and with Kelly Reilly as his daughter, stand in sharp contrast to his disgust when visting a local serial killer in prison (played by the actor’s son, Domhnall Gleeson), who clearly has no remorse.

Calvary was written and directed by John Michael McDonagh, who directed Gleeson previously in The Guard. Incidentally, McDonagh’s brother Martin wrote and directed In Bruges, one of my favorite films, which also stars Brendan Gleeson.

If you’re looking for a film that you’ll want to think about long after you leave the theater (probably after every last credit has rolled, if your showing is like the one I attended yesterday), I recommend this one.

One thought on “Calvary”