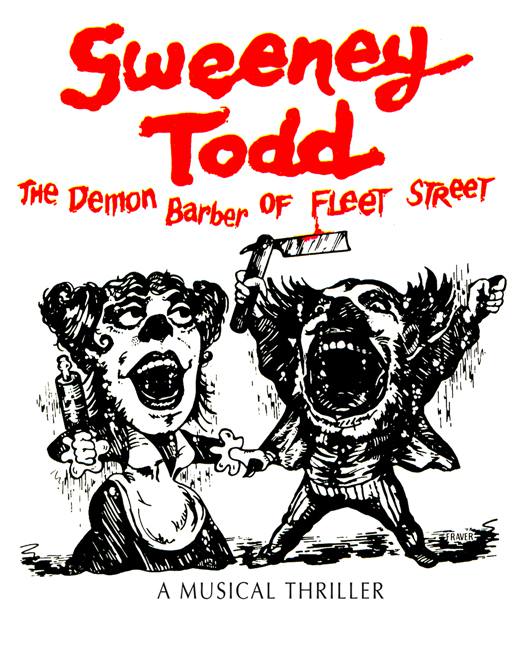 Although I couldn’t act my way out of a wet paper bag, I ended up getting involved with the drama kids in high school. I was way too inhibited to ever get speaking roles and only got cast as a Shark girl in West Side Story because I could hit the high notes in “America”. At the time, I didn’t know from Stephen Sondheim (or Leonard Bernstein, for that matter). I’d never even seen the film version of West Side Story! Oh, the deprivation that comes from not having television during most of my years living at home. I hammed it up in a couple of plays in 5th grade, before the mean girls at my tiny junior high killed my soul, and music has always been a big thing in our family. After West Side, I mostly stuck to the backstage world. I was totally unqualified to work on costumes, but had a lot of fun producing and stage managing.

Although I did go to San Francisco to see Tim Curry in Me and My Girl (which was more because we were in our midnight Rocky Horror phase than anything else), my first real introduction to musical theatre came from my first housemate, Laurenn. We listened to the Sweeney Todd and Evita soundtracks all the time. Laurenn described the plots and I was fascinated  by these shows without ever having seen them. To this day, I’ve still experienced more musicals this way than I’ve been able to see live.

Over the years, I’ve realized that, for musicals I want to listen to again and again, I need Sondheim. Kander & Ebb come in second, but Sondz is my man. I’ve been lucky enough to be in the same room as him twice…how stalkerish does that sound? In 2001, I visited my friend Jenn in New York City and we went musical crazy. One night, we went to Carnegie Hall for a Sondheim tribute and realized we could see him from our seats. About three years ago, I had tickets to see Sondheim in a Q & A session in southern California. Unfortunately, due to bad weather in NYC, his flight didn’t make it. Not only did he reschedule, but the singers (Christine Ebersole and Brian Stokes Mitchell) who were only supposed to sing a few songs that night put together a whole evening and came back on the new date as well. I think I cried when he came out on stage. Yep, I’m pretty starstruck when it comes to genius.

A brief tangent before I get into Sweeney Todd: a few weeks ago, I met up with some of my high school theater friends to see Pippin in San Francisco. Both of them were in the show when we put it on during my junior year. I didn’t participate in that show, for some reason that I don’t remember. I definitely saw it, so I was probably an usher. In any case, one of them played Pippin and both of them live in SF, so it was great fun to have dinner with them and to see the show. We got great seats pretty cheap, too, which is always nice. We enjoyed the show, even though we were not super impressed with the actor playing Pippin…of course, when he was suddenly replaced by his understudy about halfway through Act 1, we felt a little guilty. Is it terrible that it was kind of exciting? The three of us have been involved with a fair number of productions and have all attended many, but none of us had ever experienced the lead actor being replaced mid-show due to illness. It gave us an opportunity for a quick “ussie”. 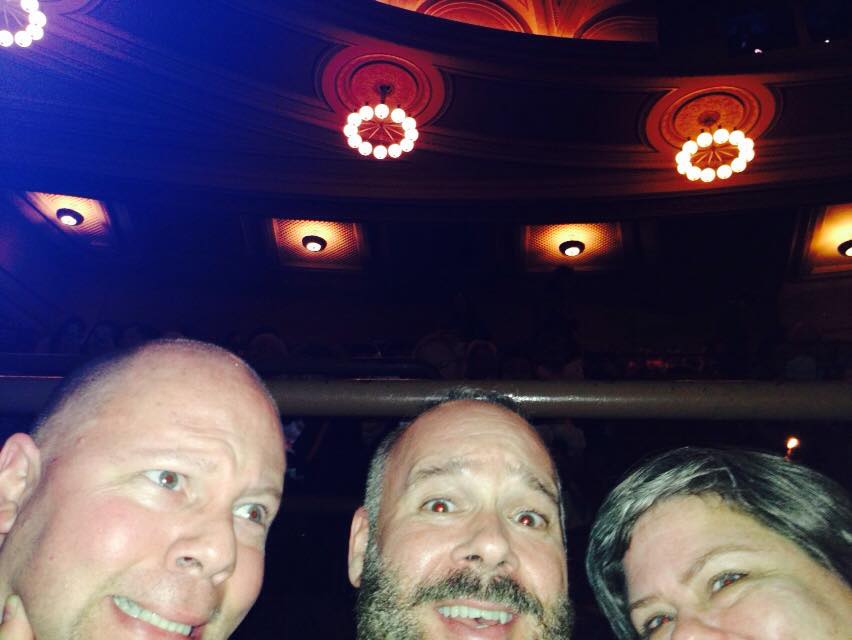 Okay: on with it. I’ve been on a Sweeney diet for the last month or so. The gluttony began when I saw an announcement in my Facebook feed about PBS airing a Lincoln Center concert production that was filmed in March and was going to be on on air 15 minutes later…I almost missed it! I know good and well that PBS repeats shows like crazy, but it was listed as “Live from Lincoln Center”. How was I supposed to know that it was going to be Sweeney Todd?! I quickly set up my TiVo to record it, because I knew I’d be watching it more than once, especially when it started and I found out that it was directed by Lonny Price and starred Emma Thompson and Bryn Terfel. Um, okay…are you serious? It was so good! It was a semi-staged concert production — there were costumes and props and a bit of staging. There was a bit of fourth-wall breaking, which you may remember I have feelings about. It worked in this show, because Sweeney tends to be a bit “wink, wink” anyway. Emma Thompson was enjoyable as Mrs. Lovett — if she mugged a bit and was more funny than dark, the show is known to be over the top, so it worked for me. Bryn Terfel was definitely the creepiest Sweeney Todd I’ve seen and Philip Quast as Judge Turpin was suitably dark. My biggest criticism is not for the production itself, but for PBS or the FCC, or whomever decided to bleep out the word “shit” twice. This aired at 9:00 on Friday night on PBS, so which children were watching this and being unduly exposed to vulgarity I’m not sure…especially considering that the plot of Sweeney Todd includes rape, pedophilia, murder, and cannibalism!

Around the time this was broadcast, I finally got around to buying tickets to see a local production of Sweeney. In fact, I ended up buying season tickets to Theatreworks, as the rest of the season looked pretty good. I decided to go on Wednesday nights to lessen the gap left in my calendar by the end of the silent film series. In between the PBS show and the live production, I spent some time revisiting my Sweeney audio. I have some completist tendencies, I admit. Of course, I have the Original Broadway Cast album (Angela Lansbury and Len Cariou), which is the version I’ve been listening to since 1990. I prefer this version because I know it so well that it’s the most fun to sing along to…what my neighbors think about that is none of my business.

Another cast album I have is from the 2005 revival, starring Patti LuPone and Michael Cerveris.  The orchestration is very spare, probably because the cast played their own instruments. Although there is much to this recording that I enjoy, LuPone’s attempt at a Cockney accent is, um, not good. I wouldn’t be much of a theatre geek if I didn’t have some love for Patti, and I do — I saw her perform at the Hollywood Bowl about 20 years ago and loved it — but I don’t like her in this. It might have been different live, but I actually find her annoying here.

The newest cast recording in my collection is from a 2012 London revival, with Imelda Staunton (I love her!) and Michael Ball. To be honest, I haven’t listened to this one much, but I like it and what I’ve seen on YouTube indicates that it was a good production. I could spend my life going around the world watching productions of Sondheim shows…wouldn’t that be delicious?! 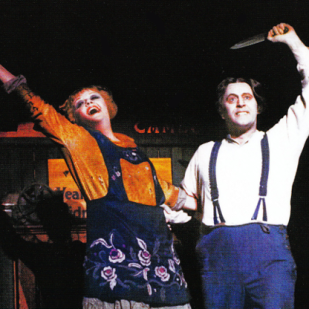 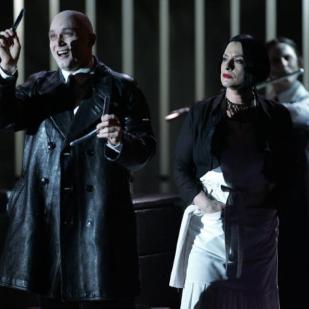 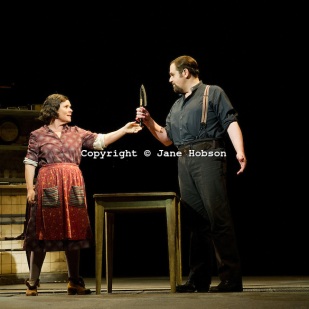 I also watched a non-musical film version of the story from 1936 starring the aptly-named Tod Slaughter and revisited both the 1982 televised version of the musical with Angela Lansbury and George Hearn and the 2007 Tim Burton film (which I enjoyed in the theater when it came out and which I own on DVD — it’s aged the worst of all, in my opinion). I might be as obsessed with Sweeney Todd as the barber himself is with revenge.

Finally, the night of the live show at the Mountain View Center for the Performing Arts arrived. MVCPA is a small, beautiful theatre with underground parking (!), and my seat ended up being in the fifth row. I was a bit confused by the lobby’s World War II themed posters until I discovered that the show’s director had chosen to set the show during The Blitz (about 100 years later than the show is usually set). I must start by saying that this production featured the best overall singing of any other version I’ve heard. Keep in mind that the other versions I’ve heard were all recorded in studios and this was live. The standouts for me were Beadle Bamford, played by Martin Rojas Dietrich, and Mrs. Lovett, played by Tory Ross (who was in Kinky Boots on Broadway!). Any singer can tell you that singing Sondheim is no joke and Sweeney Todd is full of numbers in which there are four or five melodies going on and in which not everyone is singing the same lyric. To make this sound beautiful instead of cacophonous is no small feat, and this cast pulled it off beautifully. I really can’t say enough about Ross’s Mrs. Lovett. The staging was cleverly done, the orchestra was tight, the entire evening was fabulous. I had goosebumps for the first five minutes of the show and teared up several times. At the end of the show, the cast came back out on stage to answer questions, too, which is always fun.

My appetite for Sweeney Todd: the Demon Barber of Fleet Street has been satisfied for now and I am only sorry that I’ve taken so long to write this that the show’s run is now over. I wish everyone could have seen this production. I’m looking forward to the rest of the Theatreworks season!