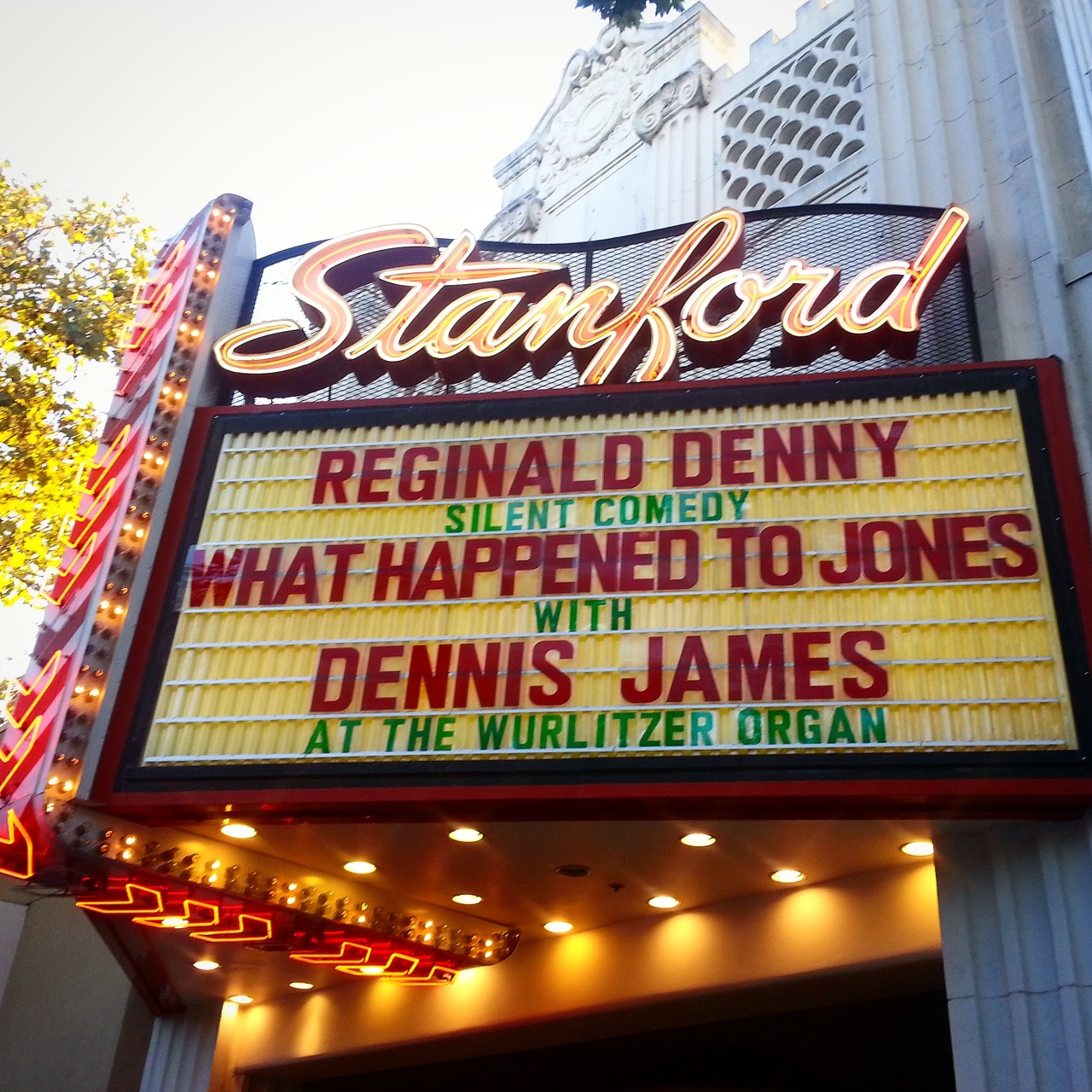 The last week of the month is always busy at work, and yesterday was no exception. At 5:00, I was more than ready to get away and go back to The Stanford for the silent film program.

The feature last night was What Happened to Jones, starring Reginald Denny. The film first played at The Stanford February 5 & 6, 1926. In sharp contrast to last week’s historical drama, What Happened to Jones  is glorious farce. Denny stars as Tom Jones, about to be married to Marian Nixon’s Lucille Bigbee. Lucille’s father has another man in mind for his daughter and warns Jones not to do anything improper or Mr. Bigbee will put a stop to the wedding. After some silliness about the couple receiving about 50 pairs of cheap candlesticks (some with the clearance tags still attached), we get into the primary focus of the story…in other words: what happened to Jones.

After a warning from Lucille to get some sleep in preparation for their wedding the next day, Jones has the best intentions upon heading home to his club. Alas, he is dragged into (gasp!) a poker game, including gambling. He tells himself he’ll only play one hand, which he is sure to win, when there is a knock on the door–the police have arrived to stop the gambling. Jones and one of his companions, Mr. Goodly (the father of a friend of Lucille), go on the run. Out the window, down the fire escape, and finally, into a reducing parlor. Jones and Goodly are decidedly unwelcome in this spa full of women in very elaborately draped towels. After literally sweating it out in a walk-in steam bath, the two finally find a way out: drag. We follow them to Goodly’s home along with policemen and strangers attempting to pick them up.

When they make it to Goodly’s, Jones has to find a way out of his dress and into normal clothing (while Jones is tall and slim, Goodly is short and fat, and his clothes look ridiculous on Jones). Here we meet Hilda the maid, played beautifully by Zasu Pitts. Having only seen her in Greed, I could not get enough of her sticking her hand out for money every time she had to keep a new secret for Goodly and Jones. Pitts was a subtly effective comedian and was known to be a scene stealer, which I can well believe after seeing this film. I’ll leave you to discover what happens to Jones, because you simply must seek out this delightful film at your earliest opportunity.

After the intermission, we were treated to two Universal newsreels, which were very interesting and which made me wish I could have experienced what going to the movies used to be like: the newsreels, the serials, the whole shebang. One of the  most entertaining news items was about a new sport, gracefully called “horse ball pushing”. This bit was filmed at Oregon State University and featured students on horses in a muddy field, pushing a huge ball around. Bizarre.

Finally, we saw a short film, Long Pants, directed by Hal Roach and starring Glenn Tyron. It was slapstick and corny and probably wouldn’t have been my favorite under any circumstances, but it suffered from following such a hilarious feature.

As usual, the accompaniment by Dennis James was magnificent and the audience had a wonderful time. I can’t wait for next week!