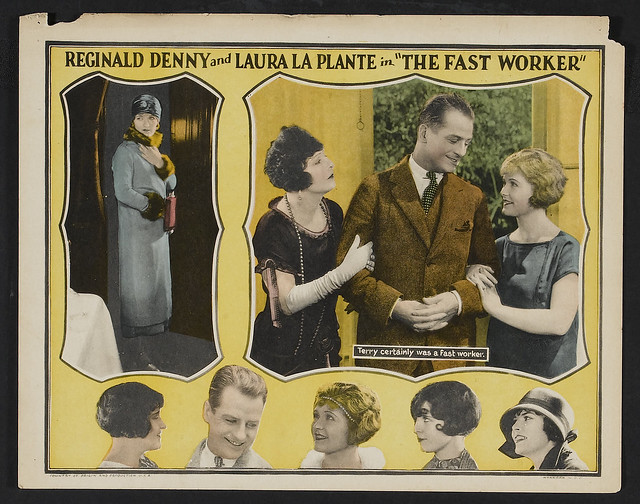 For the penultimate Wednesday night of the silent film series, the Stanford Theatre again featured Reginald Denny, this time in The Fast Worker, a 1924 farce of mistaken identity. In The Fast Worker, Denny plays Terry Brock, whom we see at the beginning of the film meeting his old friend Roxbury Medcroft (Richard Tucker).  Medcroft  needs a favor of Brock, the likes of which I can only imagine occurring in fiction: he wishes for Brock to go on vacation in Catalina as Medcroft. Apparently, to avoid losing out on a business deal, Medcroft must be in two places at the same time. It’s only when the men get to the train station that Brock realizes he will be traveling with Medcroft’s family, which includes sharing a compartment on the train from New York to California with Medcroft’s wife (Ellen Grey Terry). It’s funny — when watching these old films, I take for granted that the fashions and mores will be different, but find myself frequently jolted by the differences of technology…they’re not taking a flight that will get them across the country in the same day; they’ll probably be on that train for a week!

Needless to say, complications ensue. Brock immediately falls for his new “sister-in-law”, Connie, played by the delightful Laura LaPlante. Connie is being pursued by the dorkiest looking womanizer I’ve seen in a film: a tennis player named Freddie Ulstervelt (Lee Moran), who has 56 outfits and 17 girlfriends, all of which he changes as frequently as possible, according to the title card. Brock also has to contend with his “daughter”, Toodles (Muriel Frances Dana), who happily calls him “Daddy” as long as he’s taking her to the beach and buying her treats. This little girl is a master blackmailer.

Full of overheard conversations, wardrobe malfunctions, physical comedy, and a spectacular car chase, The Fast Worker was a lot of fun. Denny and LaPlante are so charming together that it’s easy to put aside the absurdity of the plot and to simply enjoy their chemistry.

The first short film shown this week was part 10 of a 15 part serial from 1923, Plunder, starring Pearl White, also known as “queen of the serials”. Obviously, we were dropped into the story 2/3 of the way in, having just the opening titles to catch us up with the story. White plays Pearl Travers, who is competing with her sworn Enemy, Jude Deering, to find treasure. Her boyfriend has been kidnapped. We see him tied up in an armchair, being threatened with black ash that supposedly steals one’s soul. It was all a bit ridiculous — and all I could think of was the comfy chair in Monty Python’s “Spanish Inquisition” sketch. It was cool to see part of a serial just for the history, but I can’t say I feel I’ve missed out by not seeing the rest of the story.

The evening ended with two Charley Chase comedies produced by Hal Roach.  The first, Charley My Boy (1926), directed by Leo McCarey, starred Chase as the eponymous Charley, who spends his day trying to get a job and a girl (who, of course is his new boss’s daughter).  He doesn’t make a great impression on the boss (Walter James) when he falls asleep on the job thanks to a co-worker’s prank. It only gets worse when he shows up at the boss’s home for dinner and still can’t stay awake. He shows up to dinner in plus fours, which leads to a great payoff. The second, Assistant Wives (1927), was directed by Chase’s younger brother, James Parrott. Chase is desperate to get a raise so that he no longer has to bring his lunch to work. When his boss doesn’t believe that he’s married and therefore deserving of a raise, Chase talks a waitress from the diner across the street into pretending to be his wife. The boss, played by Eugene Pallette, immediately invites himself to dinner and total mayhem ensues. The Chase shorts were so fun, albeit absolutely implausible, that I wondered why I had never heard of this brilliant comedian.

As usual, the entire program was brilliantly accompanied by Dennis James on The Mighty Wurlitzer.