It has been crazy hot lately. I’m used to a late summer heat wave, but it’s been a bit much. I went to Santa Cruz on Saturday, hoping for a bit of coastal breeze, but no such luck — I don’t think it was any cooler there than here in San Jose. On the plus side, though, it was a bit of a family day.

My sister and I have been wanting to see The Skeleton Twins, so I drove over to her house and we headed out for lunch. The four of us (my nephews joined us for lunch) went to Sake, a newish Teppanyaki place where we were the only patrons. Although the usual party vibe of this type of restaurant was missing, we had a lovely meal (steak, hold the onions, for my sis and the toddler; chicken with the works for me and the nine-year-old) before dropping the boys off with Grandma and barely making it to The Nick for our movie.

Kristen Wiig and Bill Hader gave strong performances as twins in their early thirties, still struggling mightily to grow up and move on from their troubled childhood. The entire ensemble — including Joanna Gleason as their self-involved, new age mom, Luke Wilson as Wiig’s big, clumsy puppy of a husband, and Ty Burrell as Hader’s inappropriate old flame — was on point. Sis and I loved the film, even though we were too full for popcorn.

When we got back to my sister’s house, our mom brought the boys back and delivered some homegrown rhubarb and Meyer lemons for me. When Mom and I had been talking about sorbet ideas for my ice cream party, she suggested rhubarb…it was only after I glommed onto the idea that I realized she was trying to create a demand for her (over) supply!

I got up early yesterday so that I could do the cooking before the heat made it into my upstairs apartment. I adapted a raspberry sorbet recipe from America’s Test Kitchen. I saw the recipe featured on their show recently and was keen to try the techniques designed to correct the texture problems I’ve experienced with my other sorbets.

Here is (more or less — I wasn’t particularly precise) the recipe I made:

I tasted the final product tonight and am thrilled with the results! The flavor is beautifully tangy, as one would expect from rhubarb, and the texture is smooth. The techniques of adding pectin and corn syrup, plus freezing part of the base to allow the whole to freeze in the ice cream maker more quickly, all worked as advertised.

I would recommend reducing the sugar if using a sweeter fruit and running the mixture through a sieve if using berries. Softer fruits also wouldn’t need to be cooked first, so you would just dissolve the pectin in water and blend with the remaining ingredients to make the sorbet base.

Here are some pics — I guess I wasn’t being very careful with the focus (these were all taken on my mobile phone), so we’ll just call some of these Art Photos. 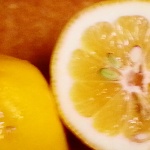 Decent chopping job, for once! 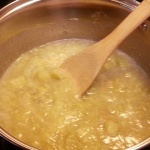